Exploring the Imposing Santorini Caldera – A Gem in Santorini’s Tiara 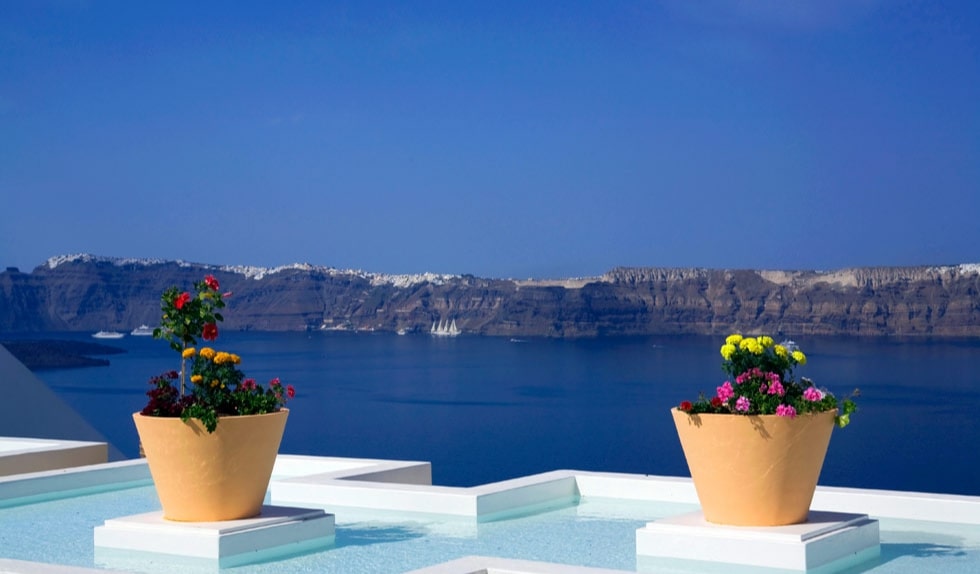 Whether you reach the beautiful Cycladic island of Santorini by boat or airplane, the Santorini Caldera is a distinguishing feature that graciously welcomes you to the popular summer retreat. Shaped to its current form after multiple volcanic eruptions in the past, the sun-kissed island with the azure-domed churches and the whitewashed houses is also called The Greek Pompeii. Here are some interesting facts about the imposing landmark very few people have heard of!

The rebirth of a once advanced civilization cradle 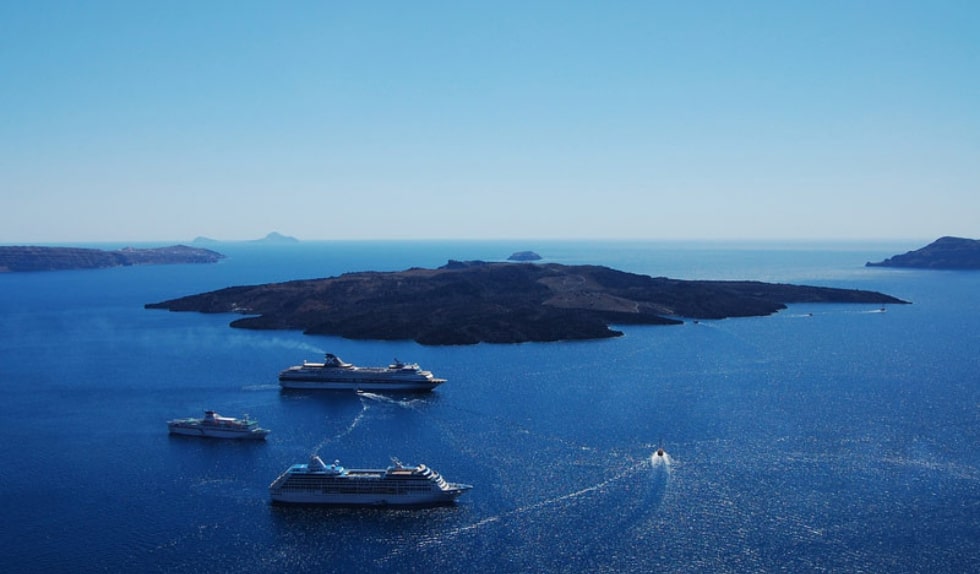 The island that is believed to have taken its name from the small chapel of Saint Irene (Agia Irini) during the Venetian ruling is home to five equally charming islands, namely Santorini, Nea Kameni, Palaia Kameni, Aspronisi, and Thirasia island.

Once covered in volcanic ash, the Santorini Caldera is an emblematic sight that is there to tell a story of an island counting 70 millennia. The half-moon-shaped bay is at the very center of Santorini and demonstrates the aftermath of a massive volcanic eruption that changed the island’s landscape and climate perturbations dramatically some 3500 years ago. Thira (Santorini) was born first, followed by Palea Kameni and Nea Kameni islands a few centuries later. 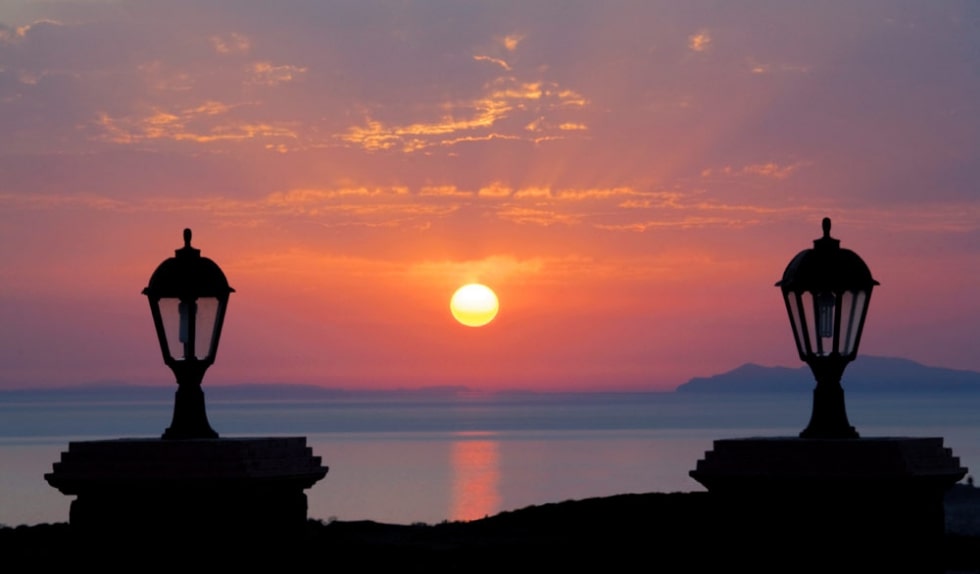 Santorini might have been an important cultural center in the past that no longer exists (most of the old Santorini is submerged underwater), but it has not lost its charm at all. In fact, the Santorini sunset views are still ravishing from all around the island. The same applies to the crystalline waters and the shores that feature black, red, and white pebbled beaches.

The best part? Visitors can enjoy breathtaking views of the Caldera and the staggering natural occurrence that resulted from a truly devastating event from the comfort of their chic Santorini cave suite at Maison Des Lys!

Is Santorini the Lost Atlantis? 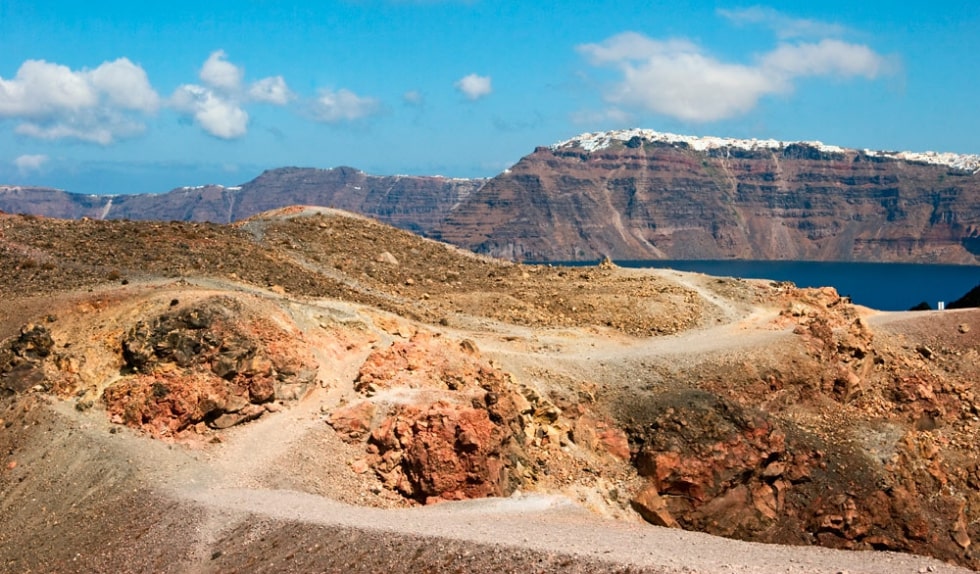 Some historians claim that the Santorini Caldera is what is left of Atlantis. If you think about it, there are similarities between the lost kingdom of Atlantis, an advanced cradle of civilisation thousands of years ago, and the fate of Santorini. They were both destroyed by a natural event and Mother Nature’s strict face (actually, the very same type of natural disaster).

Whether Atlantis was a real place or not is not determined yet, although there are mentions of it in Plato’s works (the ancient Greek philosopher). In any case, the Caldera definitely sparks the interest of not only history buffs but also nature lovers and visitors into eerie and, at the same time, spectacular sights, who book one of the many (or multiple) Santorini private tours to explore the magnificence of this island at their own pace.

From then to now! 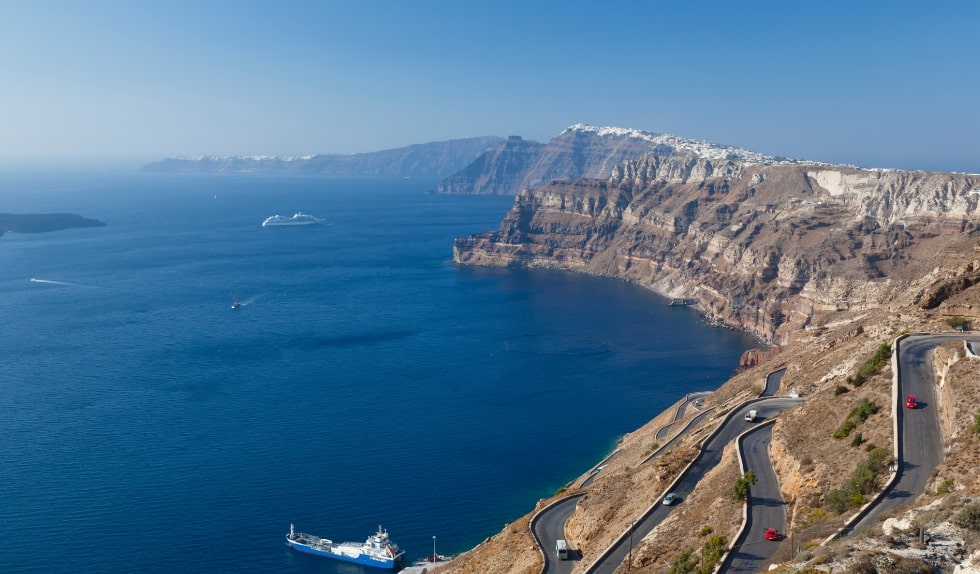 In its present form, the Santorini Caldera is the main attraction for tourists, offering unsurpassable views of the Aegean Sea and the volcanic crater itself from 1,000 ft (approximately) above sea level.

One of the most prestigious areas on the Caldera is Akrotiri, Santorini that sits right on the rim of the Caldera and offers unobstructed seascapes and heart-stopping sunset vistas. For those interested in getting to understand more about the ancient civilisations that sprung here, this is the right place to be for sure.

Besides that, this particular location is also home to the famous Santorini Hot Springs, renowned for their therapeutic properties, and is one of the most beloved destinations among newlyweds wishing their Santorini honeymoon to include panoramas of the impressive Caldera. As for the charming cave houses that sit atop the stately cliffs, circling the semi-crescent-shaped bay, they simply complete an already dreamy picture.

Speaking of heavenly views of the cobalt Mediterranean Sea and the majestic Santorini Caldera, your options are quite diverse. There are plenty of different types of accommodation in Santorini to please visitors’ requirements. 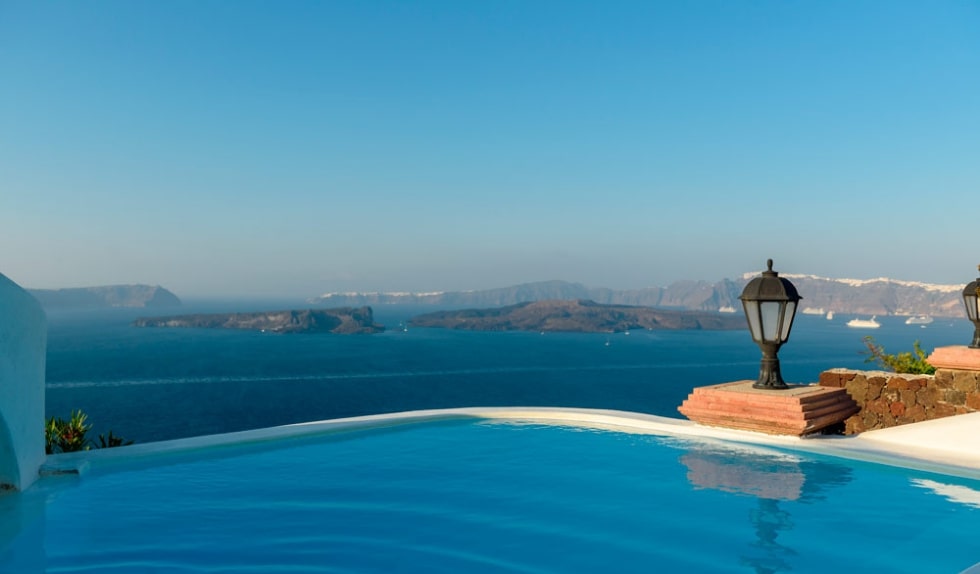 However, very few manage to combine spellbinding views with privacy, elegance, luxury, and exclusiveness. Santorini hotels with a private pool and well-appointed suites that also provide the finest and most complete range of modern amenities – like Maison Des Lys.

At night, the Caldera is lit up and becomes the beating heart of the island, with several bars, restaurants, shops, museums, and other entertainment options within an arm’s reach from your exquisite Santorini honeymoon suite or stylish 5* hotel room! 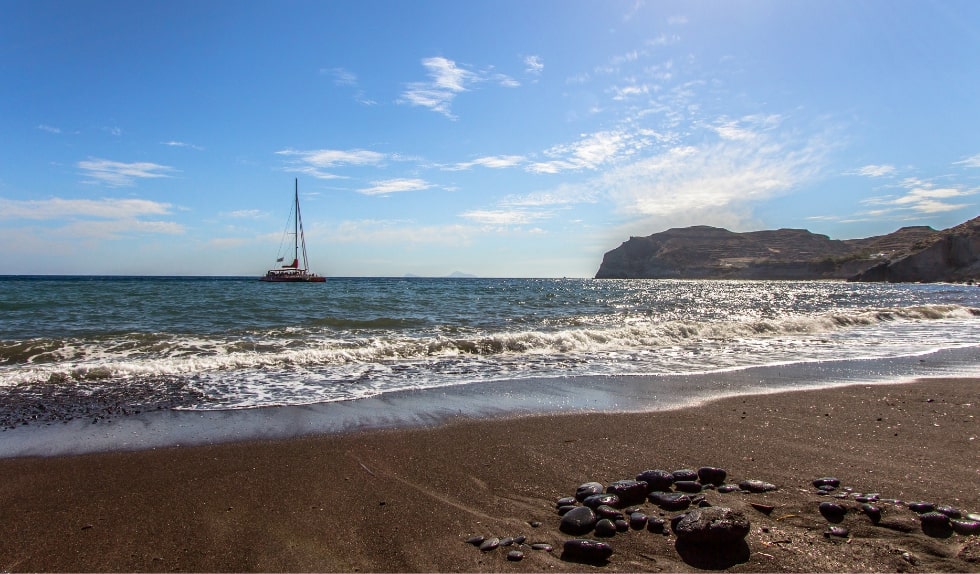 Within close proximity to the Santorini Caldera also lie the cosmopolitan villages of Fira and Oia, along with the lovely shores of Perissa Beach and sites worth visiting like the Naval Museum, to name a few.